For our honeymoon, my wife and I traveled to Mexico.  While we were there, we got to visit some of the phenomenal Mayan ruins, outside of which, are locals selling their products.  At one such place, a local man came up to us with a hand-carved piece of wood.  I wasn’t really shopping, but it was neat, and we were in Mexico, and when the guy said “one dollar”, I thought, “why not!?”  And then the story changed.  “That’s one Mayan dollar, which is twenty US dollars.”

After my trip around Fiverr, it seemed like my first impression was correct.  You can get a remarkable amount of help for only five dollars.  There are so many services available.  Graphics.  SEO.  Proofreading.  Programming?  App development?

I was amazed to find what seemed like the opportunity to get basic apps developed for a mere five bucks.  An ad similar to the one that follow caught my attention.

“Slightly complicated task” is a bit…undefined.  As I soon found out, complicated is merely a placeholder meaning “app development.”

Curious about what it would take to get an app developed, I contacted one of the “giggers” on fiverr.  We swapped a couple of messages, and he ultimately informed me that he would build my app for $270.  Wow, that’s a far cry from $5, so what gives?

I do not want to employ slave labor. While I love getting a great deal, I would hate to think that I prevented someone from earning a good (or fair) living.  So, before embarking any further on this adventure, I decided to actually work out the math.

What the question?  Is it reasonable to expect that I could get an app developed for $5?

Software development is reasonably complex.  The simplest task can quickly evolve into a rather sophisticated ordeal.  At the very least, developing an app calls for some level of skilled labor.  Since $5 is well below one hour of minimum wage in the US, this is an opportunity to leverage the power of the dollar in the international market.  So, let’s look at how that stacks up: 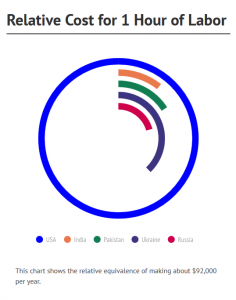 This helps frame expectations a great deal.  NOT ACCOUNTING FOR RELATIVE SKILLS LEVELS (if such a thing exists), this diagram tells me that I should be able to buy 8-10 hours of labor in India for a single hour in the United States.

With this information in mind, $270 seems pretty reasonable for an app.  Actually, it still rather seems like a good deal!  It seems rather unlike that I would be able to commission a job like this in the states for $2,700!

How many books have you written? It’s ok. Embrace YOUR voice.

I am deeply impressed by the number of books a friend has published.  Actually, this guy is incredible.  He pumps out at least one book per year and is having a blast doing it.  Not only do I admir...

The app development project was not moving in a direction that I was comfortable with.  This was a slightly complex project, and I didn't want to commit nearly $300 to my first, outsourcing endeavor....

One Response to Fiverr – Getting More Done Part 2

Living with Integrity | The Wiki of my Mind says:

[…] that’s actually a reasonable thing to do if the people are reasonably compensated (see this blog on outsourcing), but it does mean companies who exploit people and do not fairly compensate […]